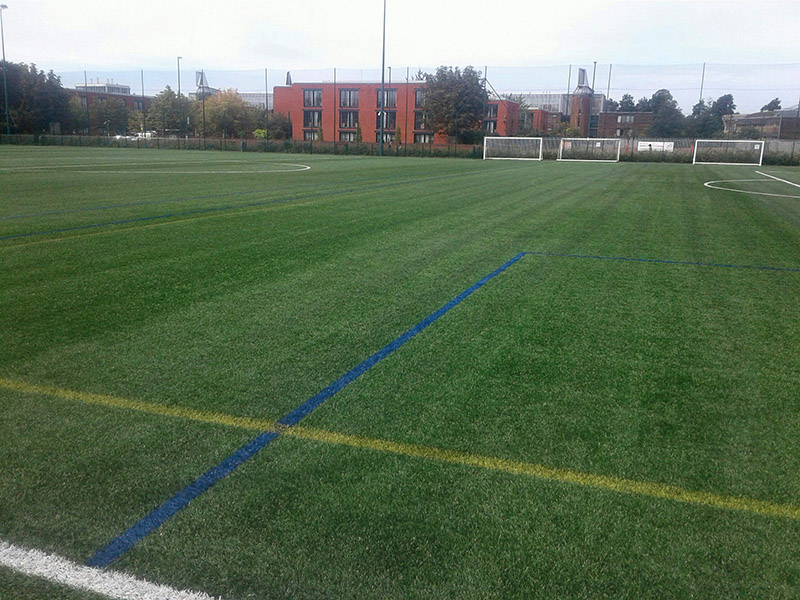 Photo caption: Surface at the University of Nottingham Jubilee Campus after Replay’s recent Revive Plus+ work

For the second year running, the expertise of the grounds team at the University of Nottingham saw them collect the Best Maintained Artificial Pitch of the Year award at the annual IOG Awards.  Lending Sports Ground Manager Greg Smith and his team of 8 a helping hand with the five artificial playing surfaces – three 3G surfaces, one sand-filled pitch and a water-based surface, are maintenance specialists, Replay.  This is in addition to many acres of natural surfaces and facilities.

“Our artificial pitches are spread over 4 different campuses” explains Greg, “and host training, play and competitions for the students as well as a number of outside and community clubs including Notts County FC, The FA and RFU. On average, each surface hosts roughly 40 hours of play each week.” With such high wear across the University’s surfaces, the maintenance must dovetail the amount of play hours. “I think people underestimate quite how much work goes into maintaining an artificial surface. We have our own equipment allowing us to conduct in-house maintenance, usually spending 55 hours a month collecting litter, brushing, raking, re-marking and checking infill levels and taking action where required.”

On top of this, the University has a service agreement with Replay Maintenance for the four campus’. This sees Replay conducting five Revive visits, and a Revive Plus+ visit per annum. Replay Revive uses a specially developed machine to remove contaminants from filled and water-based carpets. It
de-compacts and rotates the infill whilst a series of filters and vacuums remove dust, debris and broken-down fibres. Replay’s Revive Plus+ deep clean has the primary objective of separating contamination from clean infill and eliminating compaction.

“Between our in-house work and Replay’s specialism we are ultimately aiming to help increase the lifespan and usability of our facilities. One, for example, has been down for 10 years – it’s still safe to use and performing well. We used a company previously but I didn’t feel like we were getting value for money from them. With Replay we’re getting not only a deep clean on a regular basis, but the expertise and advice we need to keep our surfaces in award winning condition.”