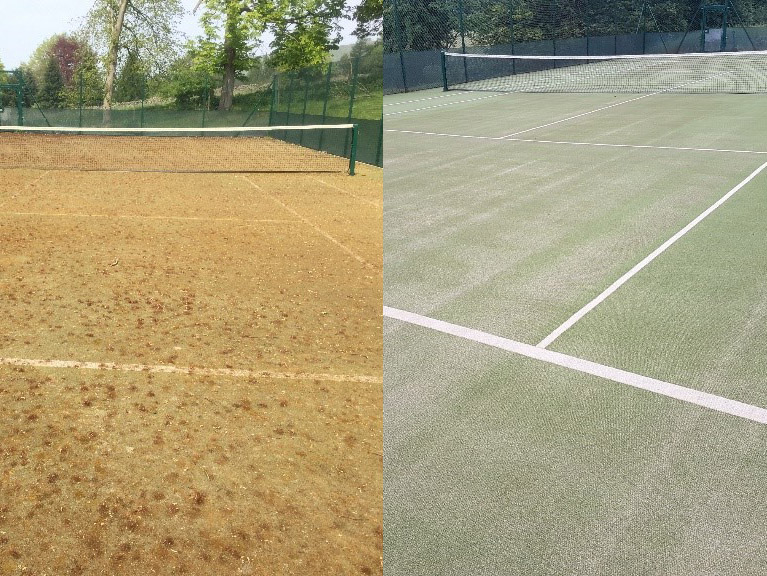 Photo caption: Before and after Replay Rejuvenation

As we enter the winter period, with the inevitable worsening of weather conditions, a new range of challenges present themselves to managers of synthetic sports surfaces. Depending on the type and level of maintenance that has taken place throughout the year, issues including moss and algae, compaction and/or flooding may be apparent. At this juncture, some Facility Managers may think that the only option is to resurface. However, there is a much more viable alternative in the form of the unique Replay Rejuvenation® process, as Garry Martin explains.

Our Rejuvenation® process can restore compacted and contaminated synthetic football, rugby, hockey and tennis surfaces to ‘as new’ performance and appearance. The first stage of the process is to extract the contaminated infill from the surface. Our Beaver machines feature unique constant air-flow plenum technology and uses compressed air to remove the contaminated layer of infill and fully decompact the surface. It can extract the infill to any chosen depth, including to the carpet backing if necessary. The pile fibres are cleaned, untangled and restored to vertical. The operator will then assess the general condition of the carpet, repairing any weak or damaged seams. A purpose-built spreading machine then distributes the fresh infill to the correct depth. An integral centrally-mounted oscillating brush then works this infill down into the surface, completing the Rejuvenation.

The process can fully restore a synthetic surface’s porosity, ball bounce and roll and player comfort. Unlike replacing a surface, the Rejuvenation procedure can be completed in days, minimising downtime and the important revenue stream a synthetic pitch can bring. It also goes without saying that it also comes at a fraction of the cost of a full replacement.

At Chipping & District Memorial Hall, when the surface of the artificial multi-use games area (MUGA) was beginning to show signs of wear and tear, they called in help from Replay. “Though the village only has around 600 residents” explains Memorial Hall Treasurer, Simon Hore, “our sports facilities are in use most days. The artificial pitch is used 5 out of 7 evenings a week and additionally at weekends by the locals, as well as a large local football club of around 200 children. Though it may not get the battering that some pitches may get, over the course of a week there are hundreds of pairs of muddy boots running about on it!”

Although the carpet is swept from time to time, in its 11 years of play no real maintenance had taken place meaning a deep clean and some external help was required. “We had a few patches of moss and with any rainfall some areas of the pitch started to hold water. We were told about Replay Maintenance by the local council, so we got in touch and they came to assess our requirements. We decided to go for the full Rejuvenation process which I was very impressed with.”

“The work took Replay around a week in July, they also then came back to mark the pitch up for football, 5-a-side and netball when the weather permitted. The process was smooth and the results are clear to see. On the back of this, we have decided to take out a service agreement with Replay which will see them coming in quarterly to keep the surface at its best. This work all-in-all has added at least another 5 years to the lifespan of our facility.” 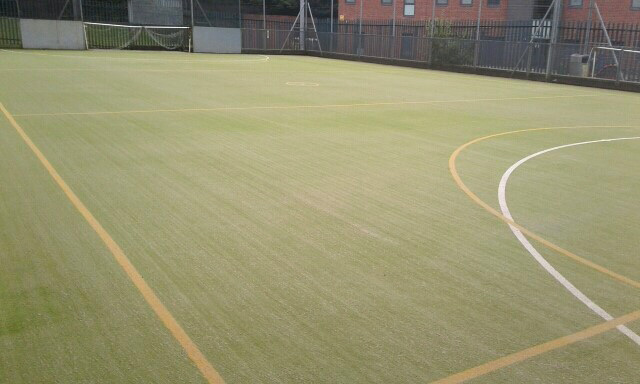 When conducted on Tennis Courts, our Rejuvenation® process uses a smaller model of our Rejuvenation Beaver unit. As with the process for pitches, Tennis Court Rejuvenation® will remove surface debris and decompact the carpet allowing for the extraction of contaminated infill using compressed air, restoring the court to an ‘as new’ condition for appearance, drainage and performance.

The tennis court Rejuvenation process recently helped to combat severely compacted and contaminated sand-filled artificial courts over at Hull YPI Lawn Tennis Club. Formed in 1906, and once the largest tennis club in Europe, Hull YPI LTC offers players a mixture of artificial and natural grass courts.  The 3 artificial surfaces had suffered because of minimal maintenance taking place and led Pippa Munzer, and her fellow committee members, to take the decision in April to call in help to bring them back to safe and playable conditions.

Over the years the maintenance of the surfaces hadn’t kept up with the level of play and over the winter of 2016 the situation peaked. “As well as holding water, they were contaminated with dirt and moss and with continued play it was moving further and further down the pile,” says Pippa.  “With the courts so slippery and dangerous it was becoming a liability concern, we didn’t want any accidents. Our coach was even forced to cancel or relocate sessions as the courts just weren’t in good enough condition.”

In a desperate attempt to retain members, they applied for a maintenance loan through the Yorkshire LTA who provided a list of approved contractors to conduct the work. “We called a few and Replay were one of the first to get back to us, with their Steven Spence arranging to come in and meet us to assess the courts. He was so knowledgeable and gave us technical, expert advice as well as testing the courts in their current condition. By the time he left, we were reassured there were options available to us and with the level of expertise Steve had demonstrated, we’d already made the decision to go with Replay.”

To fit in with a scheduled Open Day, Replay conducted their deep-clean Rejuvenation process across the courts at the end of April. “Though the weather was against them, the Replay operators worked tirelessly to get the job done. When it became apparent our courts were some of the worst they’d ever faced, the operators called for additional support – determined not to let us down and they didn’t,” says Pippa. “Since the work the courts haven’t been slippery; they’re free draining and some of our members who tour for league matches now say ours are some of the best courts in the area – all positive feedback! This will hopefully help to retain, if not boost, our membership as well as ensure the lifespan of our facilities.”

An active maintenance programme will not only maintain the performance standards and the appearance of the carpet, but will also maximise player safety and life expectancy of the installation, ensuring many satisfactory years of use. Whilst Replay Rejuvenation will form part of a robust proactive maintenance plan, you should also ensure that regular specialist Revive maintenance occurs throughout the entirety of the surfaces life.

In addition to Rejuvenation, Replay also offer a range of other services including the popular Revive treatment. This process extends the life of a synthetic sports pitch by improving grip and reducing compaction. Revive® maintenance uses a specially developed single operator machine to remove contaminants from in-filled carpets, water-based carpets and polymeric surfaces. The specialist machinery decompacts and rotates the contaminated infill whereupon a series of filters and vacuums separate the clean infill from the fine particles of dust, debris and broken-down carpet fibre. The cleaned infill is then regraded and dressed back into the surface. The result is reduced compaction, enhanced porosity and improved playing characteristics. Revive maintenance is offered as a one-off process or as a key component of a proactive Replay Service Agreement.