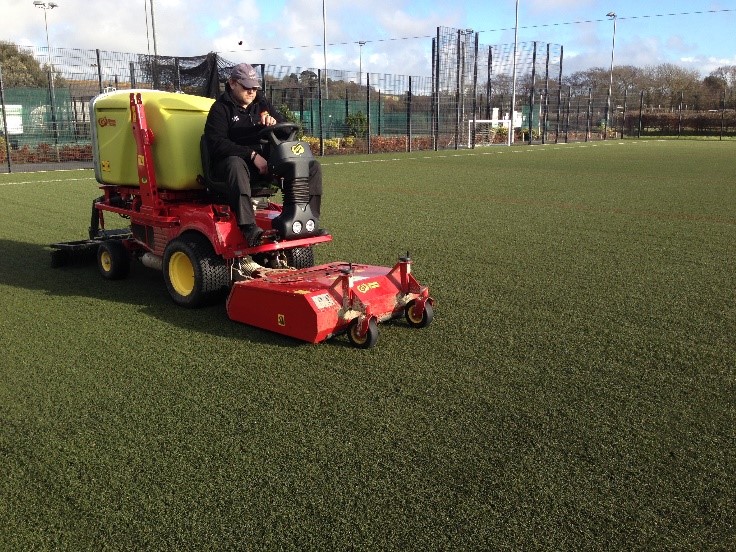 Braunton Academy, based in the village of Braunton, North Devon, may be a relatively small school having just 700 students, but its facilities for physical education are not compromised.  Despite its comparatively small site the establishment boasts four floodlit tennis courts; a multi-sport tarmacked area; an athletics track; a natural grass playing field together with an artificial grass pitch.  To top it all they also play host to the North Devon Athletics club!  No wonder Estates Manager Dave Ludley needs a little help when it comes to maintenance, and Replay Maintenance has been on hand to tend the artificial surfaces for some time now.

“Our synthetic pitch was installed in 2007 and although we conducted basic in-house brushing and other sporadic maintenance, I knew we needed something regular in place”, said Dave.  “I first came across Replay Maintenance on a course being run by the Devon FA, they were part of the team providing advice on artificial grass surfaces.  We called them in after the event to look at our 3G pitch and submit a report on its condition.  From there we quickly entered into a maintenance contract with them.”

Replay recently helped to guide Braunton through The FA 3G Football Turf Pitch (FTP) testing – a procedure which assesses a surface’s suitability for competitive play against a set of criteria in order to be placed on the FA approved pitch register. They were tested and initially placed on the interim register meaning specific work had to be carried out within 3 months of the test date.  The team at Replay organised the additional remedial work which consisted of an extended Replay Revive® process with the addition of extra rubber to the surface where required. Following the work, Replay wrote an appeal report which was accepted and Braunton is now listed on the FA 3G Football Turf Pitch register, and will remain there for 3 years

Dave again, “Replay have been great, we would have not been placed on the FA approved register without them. The team are always very helpful, very conscientious and as a contractor they are one of the nicest I’ve had the pleasure of working with.  Now that greater emphasis has been placed on conducting planned maintenance to increase the lifespan of the facility, our contract with Replay has proved good value for money and has also helped us achieve very high standards.”