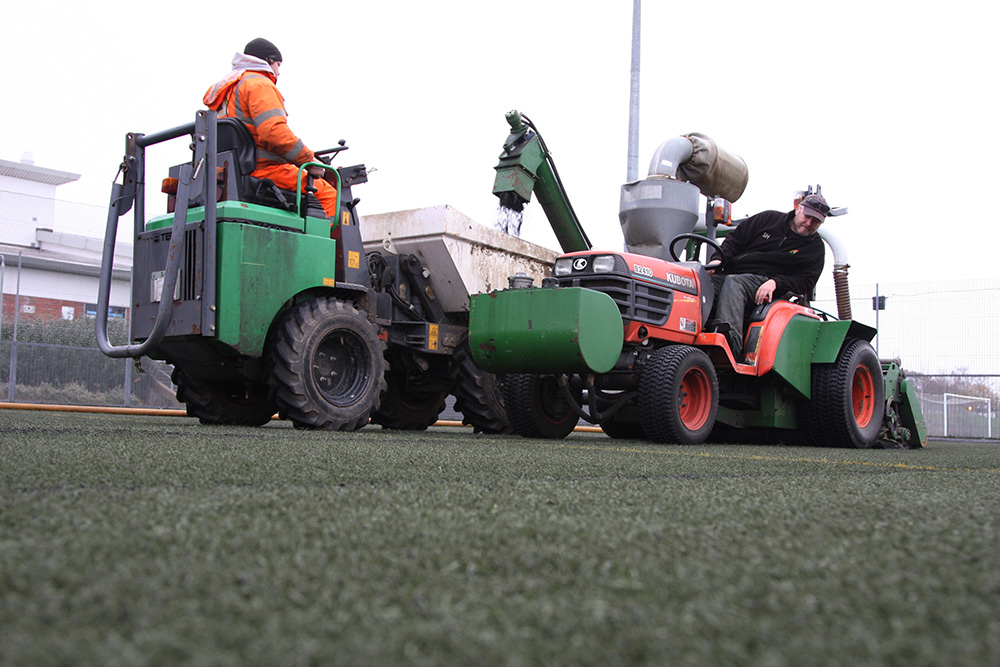 The eight year old pitch unfortunately failed to pass a pitch test to see if it could become FA accredited, which in turn would allow the pitch to be used for match play in all competitions outside the National League System (NLS). Before this can happen all pitches of all sizes must undertake a rigorous testing procedure based on the British Standard for synthetic turf sports surfaces.

The failure of the test at Shrewsbury Sports Village was due to inconsistencies in the level of the pitch and the nature of the ball rebound. Urgent action was required and the FA advised the sports facility to get in contact with the UK’s leading artificial surface maintenance contractor Replay Maintenance.

A full site survey was conducted and Replay Maintenance was confident that by implementing the correct maintenance procedure, the results would soon be turned around. It was decided that the company’s class defining Replay Rejuvenation process would be carried out which, in some cases, can double the playing life of 3G pitches while restoring it to an ‘almost’ new condition both in performance and appearance.

Using state-of-the-art machinery, Replay Maintenance’s fully qualified and experienced team firstly extracted the contaminated infill utilising compressed air delivered into the carpet. Pile fibres are then cleaned, untangled and restored to a vertical position. The newly imported rubber crumb is next distributed and brushed to the manufacturer’s specification leaving the optimum free pile using a purpose built machine. Finally the infill is worked into the surface resulting in a pitch which maximises playing performance, surface life and sees the customer with an excellent return on their investment.

It is a far more cost effective option compared to a replacement of the surface. Not only is it a fraction of the cost but, unlike replacing the artificial surface, the Replay Rejuvenation process can be completed in days – saving facilities time and minimising loss of revenue.

Contract Manager for Shropshire Community Leisure Trust, Angela Creighton, who called in Replay Maintenance after the FA recommendation, was particularly pleased with the speed of the work.

“I would definitely recommend Replay Maintenance to other sporting facilities needing a similar solution due to the speed and quality of the response – I found them to be extremely professional. We are incredibly pleased with the work that has been undertaken.

As a result of the good work carried out by Replay Maintenance, Angela revealed that the sports facility have placed an order for Replay to carry out their specialist Revive maintenance at regular intervals over the next 3 years.