Replay Clean Up in Guernsey 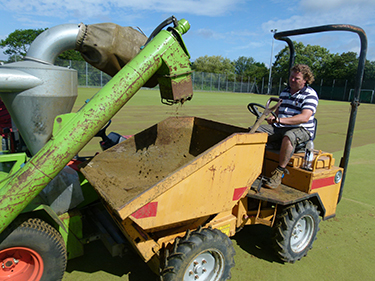 When the artificial sports pitch at Elizabeth College in Guensey began to show signs of deterioration in its ability to drain, the college’s bursar, Mike Spillar, brought in synthetic surface maintenance specialists Replay maintenance to restore the pitch.

Elizabeth College, founded in 1563 by Queen Elizabeth I, is a selective day school located in St Peter Port. The artificial pitch was installed ten years ago and was starting to display signs of a pitch whose age and continued high usage had started to threaten its usability. Not wanting to spend funds on renewing the surface that could potentially be used for at least another five years, Mike contacted Replay Maintenance for advice.

“We suffered from a lot of rain earlier in the year and the pitch was just turning into a muddy mess; the water was unable to drain through the surface, leaving silt-like deposits over the pitch. It was becoming unusable as a sports pitch,” said Mike.

“We took some samples and then looked for a maintenance company that we could work with. From the first time we contacted Replay Maintenance they have been very professional and knowledgeable. Nick Harris conducted a site survey to find out what our problem was and to then see what our options were.”

Once the site survey had been completed, it was clear that a Replay Rejuvenation® treatment would resolve the problem that the college had and restore the artificial surface into an ‘as new’ condition. The Replay Rejuvenation® process is specifically designed for artificial pitches whose infill has become contaminated causing the pitch to no longer drain adequately, leading to standing water which then leaves areas of silt on the playing surface following periods of heavy rain.

As well as looking unsightly, silt and mud can become a slip hazard to users.

The Replay Rejuvenation® process uses compressed air to remove the contaminated top layer of sand and restore the carpet pile to a vertical state. New, clean sand is then added. The process can, in most cases, double the life of a synthetic surface for less than a quarter of the cost of a new carpet installation. It is also as effective on long-pile surfaces, which are usually filled with a mixture of sand and rubber granules.

The process can extract the infill to any chosen depth, including removing all the infill right down to the carpet backing. With the correct maintenance programme put in place you could also secure an extra 5 years’ use from your facility.

“I’m delighted with the Replay Rejuvenation®. From my initial with Nick Harris, right through to the completion of the works by their skilled and knowledgeable team of operatives; I’ve been impressed with their level of professionalism and technical expertise. They have delivered an excellent service on time and on budget,” said Mike.